Saron Gebresellassi, 2018 Mayoral Candidate for the City of Toronto, greeted Rev. Jesse Jackson at a banquet sponsored by a venerable organization fighting for fairness, equality and inclusion- the National Association of Black Journalists (NABJ). Rev. Jackson expressed the need for unwavering political activism in the face of adversity.

“I am thrilled at the opportunity to learn from the iconic activist Rev. Jackson here in Detroit. I am the sole Canadian here at convention representing Toronto’s interests because much is to be gained from building strong cross-border alliances with extraordinary leaders and organizations in the United States.”
-Saron Gebresellassi 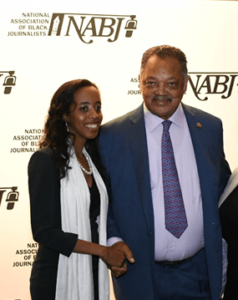 Historically, Rev. Jesse Jackson helped establish the careers of journalists by having them follow him during his presidential campaign and his foreign assignments including his meeting with Nelson Mandela in South Africa.

Saron Gebresellassi represented the needs of marginalized communities from the City of Toronto at the National Association of Black Journalists Convention in Detroit, Michigan this past week. There she met with African-American journalists representing every major outlet in the country from CNN to the New York Times. Saron Gebresellassi wishes to thank NABJ for their solidarity, hospitality and for the opportunity to present the issues to both leadership and grassroots members within the organization.

“Historically, the African-American Press has served as a catalyst for social change domestically and internationally. Toronto is directly impacted by U.S. immigration policy as can be seen with the mass exodus of African and Latino migrants fleeing the United States to resettle in our city. The mass arrests, detention and deportations migrants face once in Canada remains sorely under-reported on by Canadian and international press. I look forward to working with NABJ for years to come.”
– Saron Gebresellassi

We Need a Toronto for All of Us – My Platform